When Sweden decided to cancel 100 million Swedish kronor of wartime debt in Finland’s 50th jubilee year in 1967, this demanded a gift in return.

The Finnish government decided to set up a jointly managed cultural centre to develop co-operation between the countries.

The location of the cultural centre was subject to long discussion in both Finland and Sweden. Finnish President Urho Kekkonen advocated a centre at Sveaborg, an old Swedish-built fortress, now a district in Helsinki.

In Sweden, however, feelings towards Sveaborg were negative, and instead the location at Hanaholmen was approved by 93 votes to 67. 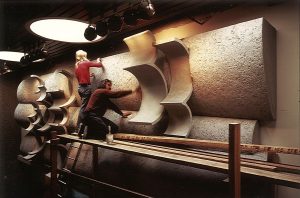 The site at Hanaholmen was owned by the Åbo Akademi University Foundation, inherited from brewer’s son Nicholas Sinebrychoff.

The Finnish Government negotiated an agreement and bought the plot. Even before the house was ready, the centre started its work in an office in central Helsinki. 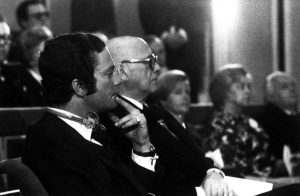 The Cultural Centre at Hanaholmen was opened on 1 June, 1975 by King Carl XVI Gustaf and President Urho Kekkonen. The building was designed by architect Veikko Malmio and the original interior by professor Yrjö Sotamaa.