Two countries – one common future is an art project that celebrates the many centuries of fellowship between Sweden and Finland.

As part of the project, two permanent public works of art were created to focus attention on the strong connection between Finland and Sweden.

One of the works, by Finnish artist Marja Kanervo, called ÅR TAL, was unveiled in August 2017 on Engelbrektsplan square in Stockholm. The work consists of granite blocks that serve as benches and feature important dates pertaining to the history of Sweden and Finland.

In turn, Eva Lange’s TRO HOPP KÄRLEK was unveiled on 13 September 2019 outside the Swedish Theatre in the centre of Helsinki. Lange’s work consists of four individual sculptures made of granite and steel. 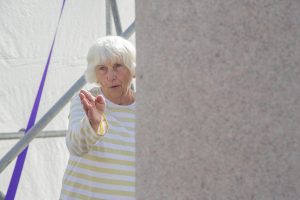 Two countries – one common future is a citizen initiative financed with donations from foundations, associations, companies and individuals. The art project was carried out by project manager Henry Wiklund, Hanaholmen, Helsinki Art Museum and Stockholm konst.